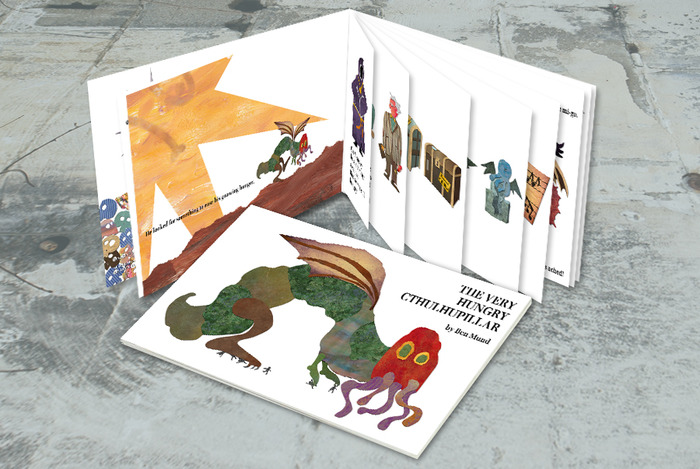 NOT a children’s book

This is a story I wrote some years ago as part of a competition on “one book in the style of another author” about 5 years ago. Being a little obsessed, I of course chose to do The Very Hungry Caterpillar in the style of H.P.Lovecraft. It seemed like an obvious choice – the little creature leaves a trail of destruction behind it and then transforms – perfect! When I’ve previously looked for this piece in the past, I’ve just searched for “Very Hungry Caterpillar Lovecraft” and there’s only one entry in google…

Not any more. Now there is The Very Hungry Cthulhupillar by Ben Mund. Turns out that this odd cross-pollination of styles has rather exploded in popularity, raising over $17,000 on Kick-starter. I can’t wait to get myself a copy! You should too. But in the mean-time, here is Part 1 of —

Before I make use of the revolver that lies before me on the dining table, so heavy with the potential violence that promises escape from the horrors I have seen, to end the tortured life of Tom Armatage, I feel I must at least try to warn the world of the terror that is the hideously hungry caterpillar.

I can scarce credit that it has been but a week since I returned home on the evening of Saturday 1st May, to find something very wrong with my one-bedroom flat. I had been at the 70th birthday-party of Professor Tobius, my supervisor in pharmaceutical sciences at Miscatonic University, and it was happily and a little tipsily that I entered my Arkham apartment. I paused in the act of dropping my jacket over the back of my comfortable reading chair, suddenly sensing a strangeness in the room that seemed to emanate from the tall pot plant by the window.

I could not say what it was that first caused me alarm, but as soon as I laid eyes on that little egg lying on a leaf in the moonlight I felt a tremor run through me, and knew that this was the source of my disquiet. I approached, curious of my own reaction to such an innocuous sight. The egg was small and white, about as unthreatening an object as one might expect to find. And yet as I looked at it I could feel the hair on the back of my neck rising, and my eyes wanted to sheer away from it, as if the egg existed in more dimensions than the usual three, stretching the space around it so as to suggest at non-euclidean shapes that the human mind was not equipped to comprehend.

Straightening up, I laughed at myself for such fanciful thoughts, and yet I think I must have laughed also to bring something human back into that room which had, with the simple addition of a tiny egg, become oddly alien to me. Putting my reaction down to the drink with which the professor had generously plied me, I divested myself or the remains of my attire and made my way to my bed where from I knew nothing of this or any other world until the next day.

In the warm sun of the next morning, the apartment had none of the unearthly strangeness of the previous night. The Sunday paper lay enticingly thick on the door-mat, and I did not recall the presence of the disturbing egg until I had put on some coffee and sat down to the day’s cryptogram. As I reclined in contented mental application, I suddenly became aware of a presence in the room, as if I was being observed by some cosmic source of violence so potent as to resemble a physical weight bearing down on me.

Looking up, I saw that on the leaf where the egg now lay empty and spent, devoid of any greater meaning now its work was complete, a tiny caterpillar moved with the slowest of uncouth undulations. Curious, I left aside the paper and approached it. Close to, the form of the tiny creature was grotesque almost beyond the ability to put down in words. Many segmented and multi-limbed, its mottled hide was the green of long-decayed matter, making its classification as vegetable or animal less than clear to me.

I know now that by reaching out at that moment I could have most likely crushed its little body between thumb and fore-finger, vouchsafing not only my own future sanity but that of many others that even now rave against the padded walls of New England’s over-crowded sanatoria. But the moment passed all to soon, for as I stood there, the caterpillar turned its malign green head and looked at me with eyes that spoke to an insidious intelligence that was impossible ages old, greatly superior to my own, and along wholly inhuman lines. The titanic hunger in that gaze froze me to the spot for the space of several heart-beats.

It is then that I fled out of the room, the flat and out of my own faculties for a time, only to return to myself many hours later, shaking, on a bench in Gloucester park. I spent the night wandering the streets, in too nervous a state to sleep. I could not have explained, if asked, why I did not return to my apartment, but in the clarity of hindsight I believe the truth is that I harboured a dread of having those miniature black eyes upon me again, less madness wholly consume me.

In the grey pre-dawn hours of Monday morning, exhaustion caught up with me and I found myself at my front door, key in hand. Telling myself that I had over-reacted to hang-over induced paranoia I let myself in and bravely directed my gaze toward the pot-plant. The unwholesome caterpillar was not there. Releasing a breath that I had not consciously held, I closed the door and threw myself down on my bed.

Waking late in the morning, and assuring myself that the caterpillar was nowhere to be seen, I resolved to make the most of what remained of the day, keeping myself busy cleaning and organising my spartan dwelling, even beginning work on writing a paper for Professor Tobius that I had long delayed due to its tedious nature; anything to occupy the mind so that it could not stray into areas from which it might not return. In the afternoon I shopped at the Monday market for fresh vegetables and fruit, feeling a need for physical cleansing and nourishment that might aid my mental state in a similar manner.

Though I do not confess to being an enthusiastic cook, taking most of my meals at the university, I pride myself on my culinary skill, and made a particular effort that evening as I had eaten little for the last two days. As I sat down to a bacon-roasted pigeon breast, the smell of its thick steam struck me as being slightly off. I frowned and took a deeper sniff. There was certainly a foetid odour overlaying the rich scents of rosemary and seared game-meat, and I was immodest enough to assume that my cooking was not be to blame.

I stood and prowled around the room lead by my nose like some great ungainly tracking bird. The smell was most concentrated near to the bowl that I had earlier filled to the brim with fruit and placed on an ornamental table by my reading chair. Here the stench was veritably unholy, and I felt the urge to step away as the odour seemed to directly assail the primitive part of the brain that recognises imminent peril.

I stood my ground and examined the table. At first glance, all was as it had been, but closer analysis evidenced that a single red apple had a hole in it which had certainly not been there when I returned from the market. Leaning down I could see clean through the apple via another hole in the far side. Tentatively, I reached out and touched the fruit, which collapsed into a putrescent puddle of skin and ooze. The smell intensified such that I was compelled to finally step back and cover my face with my arm, my eyes watering despite this precaution.

Having sought to persuade myself the whole day that the caterpillar had left in my absence, I knew immediately that this must be its noisome work. I had felt its hunger emanating from its malevolent stare, and though it had devoured but a single apple, the precise destruction of its jaws in leaving only the skin and a single pair of holes oddly chilled me to my core. I washed my hands compulsively before sitting back down to the dinner I no longer had any appetite for.  Questions teemed in my head: why was it consuming my fruit; what would it consume tomorrow; where was it now; and what monstrous thing would it eventually become?

I sat there until my food grew stone cold and then threw it away. At this rate I would starve before the end of the week, but by then I would have bigger problems to deal with.